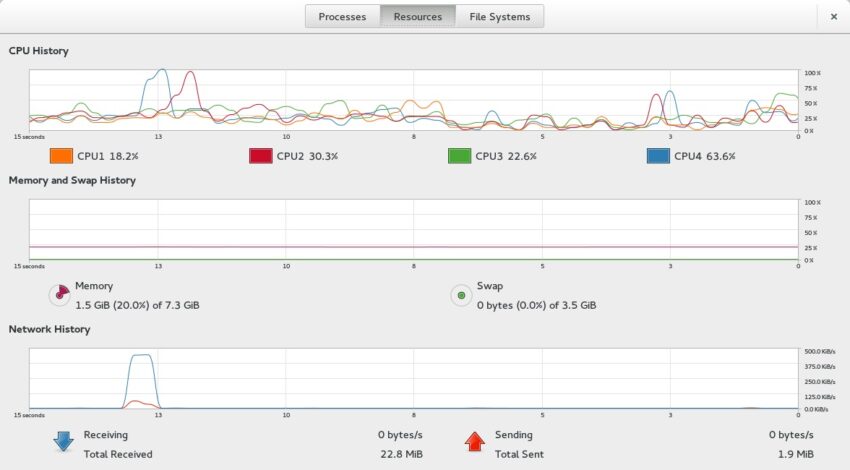 One of the essential parts of any operating system is the task manager, so Linux-based operating systems also have it. For many different reasons, Linux users use task manager services to monitor and manage resources. Sometimes, we face problems with certain applications that crash and processes don’t close, it’s very strange, but sometimes it occurs. So I used the Linux task manager to discover the process and finally nailed it. Furthermore, you can use a task manager for other purposes besides software testing or if you want to see your system performance.

What is Task Manager?

Linux Task Manager is an operating system component that allows you to see every task process and memory usage and also shows the computer’s overall performance. Using task manager, you can see how many system resources a program uses, can close a frozen program, and view available system resources.

Why do we require a Task Manager?

Task Manager is an advanced tool that enables you to control the activity of your apps. A task manager monitors a system’s services, shows all applications running on a computer, and gives information about the computer’s processes, memory, and overall status. Whenever necessary, the task manager can end processes and services and change the processes’ resources using priority.

Linux task manager, and any task manager, helps centralize the work activities and thus reduces the risk of data losses and increases work efficiency. It can prioritize tasks per the user’s need and provide reminders when some services or applications consume unwanted resources.

Does Linux have a task manager?

How to open a task manager in Linux GUI?

Most popular Linux distributions use GNOME or KDE graphical user interface. In a GNOME-based Linux machine, press the Super key (mostly known as the Windows key) and search for System Monitor in applications. System Monitor is a utility similar to Windows Task Manager.

How do I open Task Manager in Linux Terminal?

There are so many ways to open the Task Manager in the Linux terminal. One of the most popular ways is to continuously use the “top” command, which will show you all running processes and their resource uses in the terminal.

Another way is to use the “ps” command in the terminal, which will display a list of all running processes. You can use the “ps- ef” command to see more information about a specific task.

In Ubuntu Linux, Task Manager is called System Monitor. You can open the system monitor using the graphical user interface (GUI). The System Monitor tool displays its data in three tabs: Processes, Resources, and File System. The Processes tab lists all processes currently running on the user’s system and their PID, CPU usage, and memory usage. The Resource tab provides users with information about the system’s CPU, memory, and disk usage. The File System tab shows users a list of all mounted file systems on the system and their capacity, free space, and used space.

Besides the graphical user interface, you can run the Linux task manager in Ubuntu using the command prompt. Open a terminal and run the “top” command, which will show you all as the system monitor shows. In Ubuntu, the system monitor is a program that can kill, end, or restart any programs and processes on the system at any time and log all activity.

How to open task manager in Kali Linux

Task Manager is commonly known as a system monitor in Kali Linux. You can easily open and observe the system’s service with a system monitor if you use a Gnome desktop environment. You can open the Task Manager in Kali Linux by going to Applications > System Tools > System Monitor. The System Monitor application will open and show information about programs and processes running on the computer.

In the system monitor, programs and processes can be sorted by name, process ID, memory usage, CPU usage, and more. You can also use Linux task manager to end any program or process. Another way to use the Linux task manager in Kali Linux is by using a terminal. Open a terminal and run the “top” command. You can see overall system resource usage and also by individual service.

In the Linux Mint distro, the Linux Task Manager or the system monitor provides information about the usage of system resources, running processes, and applications, as in others. Like other Linux distros, Mint also has a process manager to terminate or kill processes.

The system monitor in Linux Mint displays the results of CPU usage, process ID, and memory consumption. If you want to end or restart a process, select it and then press the “End Process” or “Restart” button. You can end and restart multiple processes simultaneously here. In the terminal, the top command goes to process the same data.

There are many different Linux task managers or system monitors available. This article will cover an exhaustive list of helpful and popular task management applications available for Linux. These applications let you see the resource consumption of personal methods and permit you to set up alerts and manage their behavior. The term “resource consumption” mentioned here mainly refers to CPU, memory, and network usage.

The Gnome system monitor is one of the most popular Linux task managers with a graphical Linux interface. You will find it in the GNOME desktop environment built-in with many Linux distros. Gnome system monitor features; you can view the storage status of all storage devices, check memory status and swap, and get information about network status.

Additionally, you can see all service processes graphically and control them as you need with a convenient GUI interface. An overall system performance summary also shows the which refer the condition of the system. 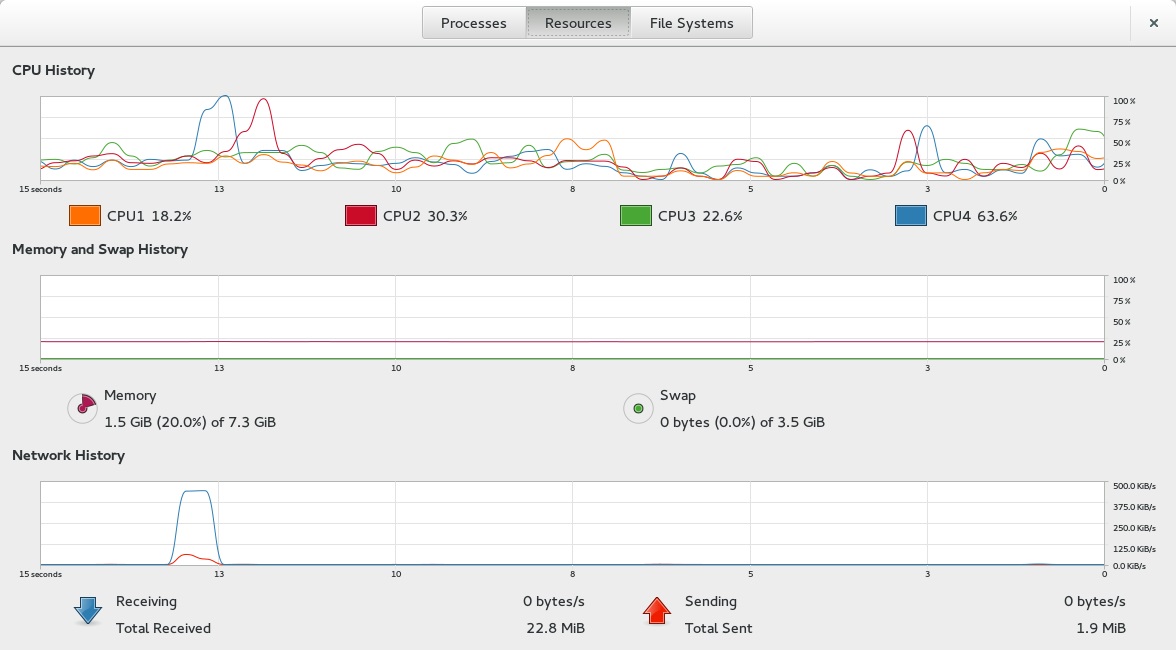 The command “top” is a command line tool that can show the resource consumption of different processes and tasks running on your Linux system. It is installed by default on almost all Linux distributions. Running the “top” command will show the overall usage of system resources along with individual tasks separately. It also features an option to change the running process’s priority.

Linux task manager “top” is indeed helpful if you want to identify the processes that are eating up system resources and if you want to compare different applications. The data presented at the top is in an excellent tabular form.

The command “htop” is an interactive system-monitor process viewer, which is designed as an alternative to the Unix command “top.” It shows a frequently updated list of processes running on a computer, usually ordered by amount of CPU usage. Unlike top, htop also provides a complete list of running processes rather than the top resource-consuming processes. “htop” tool uses color and gives visual information about the processor, swap and memory status.

The “ps” tool is another powerful task manager for Linux that comes preinstalled by default on almost all Linux distributions. The command “ps” stands for process status, and the result of the “ps” command shows the status for the current user and session by default. Compared to the “top” and “htop” it is not as advanced as them. If you want to find a particular job’s process or PID, running this command on the terminal will be helpful.

Glances is one of the best task manager for Linux based on Python. It is an open-source tool where developers can add various custom plugins to enhance its functionality and flexibility. Additionally, it helps you to grab large amounts of data for your system resources through a web interface.

Using the Glances tool, you can export system statistics to CSV, Elasticsearch, Cassandra, and other formats. It uses a built-in web user interface, so the flexibility to monitor your system from any device goes to a superior level.

LXTask is an open-source, lightweight, and desktop-based graphical Linux task manager software. It is written in GTK+ as a task manager for the LXDE, the Lightweight X11 Desktop Environment window manager for Linux-based operating systems.

The LXTask application only requires the GTK+ GUI Toolkit. These toolkits should be preinstalled on your system before attempting to install LXTask manually. It can be used in any GUI Linux desktop environment, even if it is part of the LXDE desktop environment.

You first need to download the latest version from Softpedia to install it on your Linux system. Then save the tar archive to a location of your choice, thereafter extract its contents and open a terminal emulator. In a terminal, use the directory-changing command “cd” to go to the location of the extracted files. Now run the following commands “./configure,” and “make” commands to optimize and compile the source code. Finally, run the “make install” command as root to install.

Xfce is the most renowned open-source desktop environment for Linux and other Unix-like operating systems. The Xfce system monitor, well known as “xfce4 – Task Manager”, is a task manager and system monitoring program made with the Xfce desktop environment in mind. It can simply show the list of running processes. Additionally, at the windows top area, two simple non-resizable graphics show CPU and memory usage.

Conky is used to monitor multiple system resources, including process, memory, swap, disk usage, temperature, upload, download, system messages, and much more. It is highly customizable; however, the configuration can take time to understand.

Conky Manager is a visual front-end for controlling Conky config files. It is a task manager of Linux used to view the system resources usage of your system. It gives options to start, stop, restart, browse and edit Conky themes that are already installed on the system. Currently, packages are available in launchpad for Ubuntu, Linux Mint, etc.

Mate System Monitor is the default task management software for the Mate desktop environment. It is a graphical user interface based task manager for Linux that helps novice Linux users to get important system information.

Mate System Monitor lets you know the total running processes, including process ID, memory allocation, CPU usage, and more, through an intuitive tab interface. Additionally, it offers some advanced functionality in terms of killing, stopping or changing the priority of various processes as you wish.

KDE System Guard, popularly known as KSysGuard, is the default task manager for Linux and the system performance monitor for the KDE desktop environment. This Linux task manager’s notable feature is that it supports client and server architecture. Additionally, it gives you the facility to monitor remotely and locally both ways. Like other Linux Task managers, it can kill/terminate the problematic program easily. KSysGuard can be used from both graphical interface and terminal mode.

“pstree” is a Linux command and a visual alternative to the “ps” command that shows the system running processes and threads in a tree format. It shows all the process trees rooted in the processes owned by a user that has been specified previously. “pstree” is scriptable and works very well with other terminal commands, making it more useful.

Based on different users and their preferred platforms, everyone has their judgment to rank the best task manager for Linux. From my using experience, I prefer “top” in the terminal and Gnome system monitor graphically, but you can use whatever you like. If you are a new Linux user, you should use GNOME System Monitor or KSysGuard, but if you are an experimental Linux user, htop, ps, and pstree are for you.