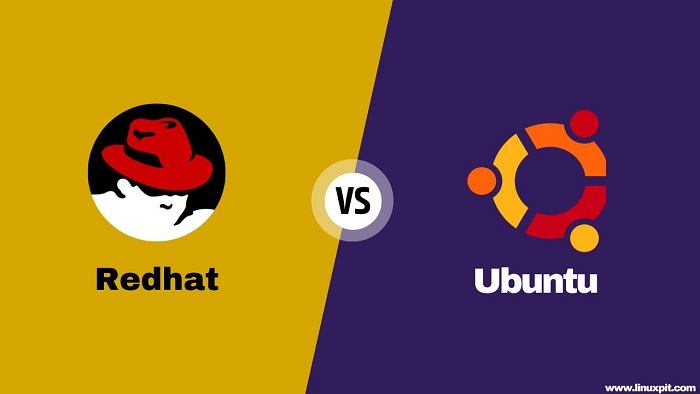 In present days almost everybody knows what Linux is. In short, Linux is an open-source kernel, the base of many community-based OS that runs across numerous computers on the market.

Based on specialization, there are hundreds of Linux distributions in the market. Knowing everything about all distros is hard enough. Moreover, as a Linux user, you should know the most used Linux operating systems. This article discusses Redhat vs Ubuntu – the most widely used and well-known Linux distros.

What is Red Hat Linux?

Linux distros are the most popular OS spreading in the industry. Some of the distributions of Linux have become effectively popular with its users’ desktops and servers; Red Hat Linux is one of them. They named their initial release Red Hat Commercial Linux, and Red Hat Enterprise Linux is one of the later and more famous products of Red Hat releases. RHEL is released in multiple server and desktop versions and supports almost all load types, whether cloud, virtual, or physical.

What is Ubuntu Linux?

Ubuntu means “humanity to others” and this distro truly represents its name. Definitely, Ubuntu is an open-source operating system, and Ubuntu supports business, education, and personal home use. Ubuntu is based on Debian OS, with approximately 20 million users under its belt.

Comparison Between Redhat vs Ubuntu

Before determining which is the best Linux for you between Redhat and Ubuntu, you should know some facts, and that information will help you pick the perfect Linux distribution.

RedHat is a commercial Linux distro based on the open-source distro Fedora. On the other hand, Ubuntu is based on Debian architecture, and these architectures are entirely different. Both Redhat and Ubuntu can be installed with Gnome’s default graphical user interface. But their commands, initial look, and working environment are different.

At the same time, with Redhat, you will see two bars on the left side of the desktop, top and bottom, and some default application icons. The bottom bar contains windows for running applications. Additionally, its users will get two buttons on the top bar named Applications and Places.

Currently, the installation process of Redhat and Ubuntu is very easy and simple. Both of them use their specific installer, which will guide users to complete the installation. When you try to install Redhat, it will offer you some different installation processes and different methods. You can install Redhat with a bootable RHEL CD/DVD, USB flash drive, using a hard drive, or via an NFS server. As Red Hut is an enterprise solution, its official activation requires a subscription.

You have to buy a subscription and renew it every year, which starts from $349 per year. RedHat offers you RHEL Developer Workstation with RHEL add-ons, a suite of software collections, complete developer toolset. But the sad thing is, they are not free also; you have to get them for $299 to $499.

On the other hand, you can easily install Ubuntu by booting your computer using a CD/DVD or USB flash drive and using a hard drive by using the required Ubuntu version. And the fantastic thing is, it won’t charge you at all.

Now, we are comparing Redhat vs. Ubuntu by their system requirements. The latest version of the Ubuntu desktop edition requires a minimum of 25GB of free hard disk space, at least a 2GHz dual-core processor, and 2GB of RAM.

The amazing fact of the Redhat vs Ubuntu battle is that both have their own software management systems and are different from each other. Well, as we already know, it’s obvious that their basic architecture is different.

Surprisingly, Ubuntu Package Manager is a powerful tool for managing APT software. Even their features are more user-friendly than Red Hat Linux.

Necessary Software Out of the Box

RedHat comes with the Mozilla Firefox browser, Panir webcam app, video as video player, and Libre Office tools by default with GNOME graphical user interface. On the other hand, Ubuntu has default apps such as Mozilla Firefox web browser, Rhythmbox music player, video player, image viewer for photos, and Thunderbird as a mailing app. As Linux kernel, both of them use almost common Linux system monitor as a task manager.

Red Hat and Ubuntu’s system customization significantly ease the Redhat vs Ubuntu battle. Because both distros provide a high level of customization, their user want. We already know that we can customize the look of your system with the GNOME Tweak Tool. You can change your desktop, display, color, background, notification, date-time, privacy, keyboard, mouse, Bluetooth, and more.

The Redhat and Ubuntu software update and system upgrade options are different, which helps the RedHat vs Ubuntu comparison conflict. Let’s see the available options.

Ubuntu provides a software update utility tool. It will help to check if an update is available for an app. Users can easily update the app from here, which is faster to check for updates than other software. Moreover, you can update software and system through terminal command-line tools.

In contrast, Redhat comes with two options to check for updates and install them. It provides a software update option inside the system tool. You can update the software from there or check for updates using commands via yum. If there is an update, you can install it using the command-line tool.

All support for Ubuntu is community-based, but besides community, Red Hat provides enterprise support also.

RedHat is an operating system that primarily focuses on corporate functions, and it was created exclusively for business support. Therefore Red Hat is not much gaming friendly. In contrast, Ubuntu is primarily a Linux distro for personal use. And playing regular computer games is certainly not a part of the business purpose.

So in comparison to Red Hat vs Ubuntu, Ubuntu is the best option for playing games on the computer.

Redhat does not maintain a fixed cycle for releasing a new version or update. The latest version of Red Hat Linux when writing this article is 9.1, released on November 15, 2022. Since Redhat doesn’t offer frequent updates, it takes months for an update to arrive, And the release time for new versions varies between one and four years so far.

Ubuntu maintains prescheduled update cycle for its different versions. Every major release of Ubuntu gets a development codename, and every version has a support and updates life cycle, and they publish a Long Term Support version also.

Is Red Hat better than Ubuntu?

Now the question arises in the battle of Red Hat vs Ubuntu which is better?

Red Hat is an enterprise-level service for business use, and it’s not free to use and is not updated frequently as other distros. It focuses on stability then frequency. On the other hand, Ubuntu is a free operating system based on the Linux kernel, updated frequently, and very stable also.

As an enterprise service, Redhat is popular with corporate individuals. Also, it is not a matter for the person who actually wants better service. On the other hand, Ubuntu is a free operating system that is popular with general Desktop users.

We cant make a distro winner in a single word. We have to consider the total scenario and individual requirements. Both Red Hat and Ubuntu is a great choice based on their user’s needs. As Red Hat focus on the business, they try to stay a few steps ahead of another distro to take advantage of the competitive market.

Why Red Hat Linux is the best?

Redhat is a trusted enterprise partner more than other enterprise distros. A Red Hat Enterprise Linux subscription gives you direct access and advocacy within the open-source community and enterprise support and service.

It also provides a consistent, stable, high-performance platform across hybrid cloud deployments. These include built-in manageability and integration with the vast Red Hat automation portfolio.

Why is Ubuntu Linux the best?

Ubuntu Linux is one of the most popular open-source desktop-friendly operating systems. Ubuntu Linux is very easy to use; anyone with basic computer knowledge can set up and use this system.

Ubuntu Linux doesn’t cost a penny to download, install, use, and update. Download it from Canonical’s website, visit your favorite torrent website, create a bootable ISO, or burn it to a USB drive. The freedom to customize your system is one of the main benefits of a Linux-based operating system that you can get in Ubuntu Linux.

That is the reason why ubuntu Linux is the best.

What is the difference between Red Hat and Ubuntu Linux?

Ubuntu is used on desktops or servers; for both cases, it has a different dedicated version. On the other hand, Red Hat Enterprise Linux is used on desktops, servers, hypervisors, or the cloud, mostly for commercial use. If anyone wants, they can use it as a desktop computer, also.

Before choosing a distro, you first need to know what you want. Which one can meet your needs? You need to go with the right distro that perfectly matches your requirements. If you can’t determine, you should try both; it will be the best way to realize which one is perfect for you.

We are trying to resolve Redhat vs. Ubuntu conflict. But the bottom line is that the whole conclusion depends on the user’s needs. The requirements of an operating system vary from user to user. Some users will say that Ubuntu is better, and again, some would say Red Hat is better. It really depends on you. So first, use these two systems and then decide which is best. Thank you so much for giving us your valuable time.